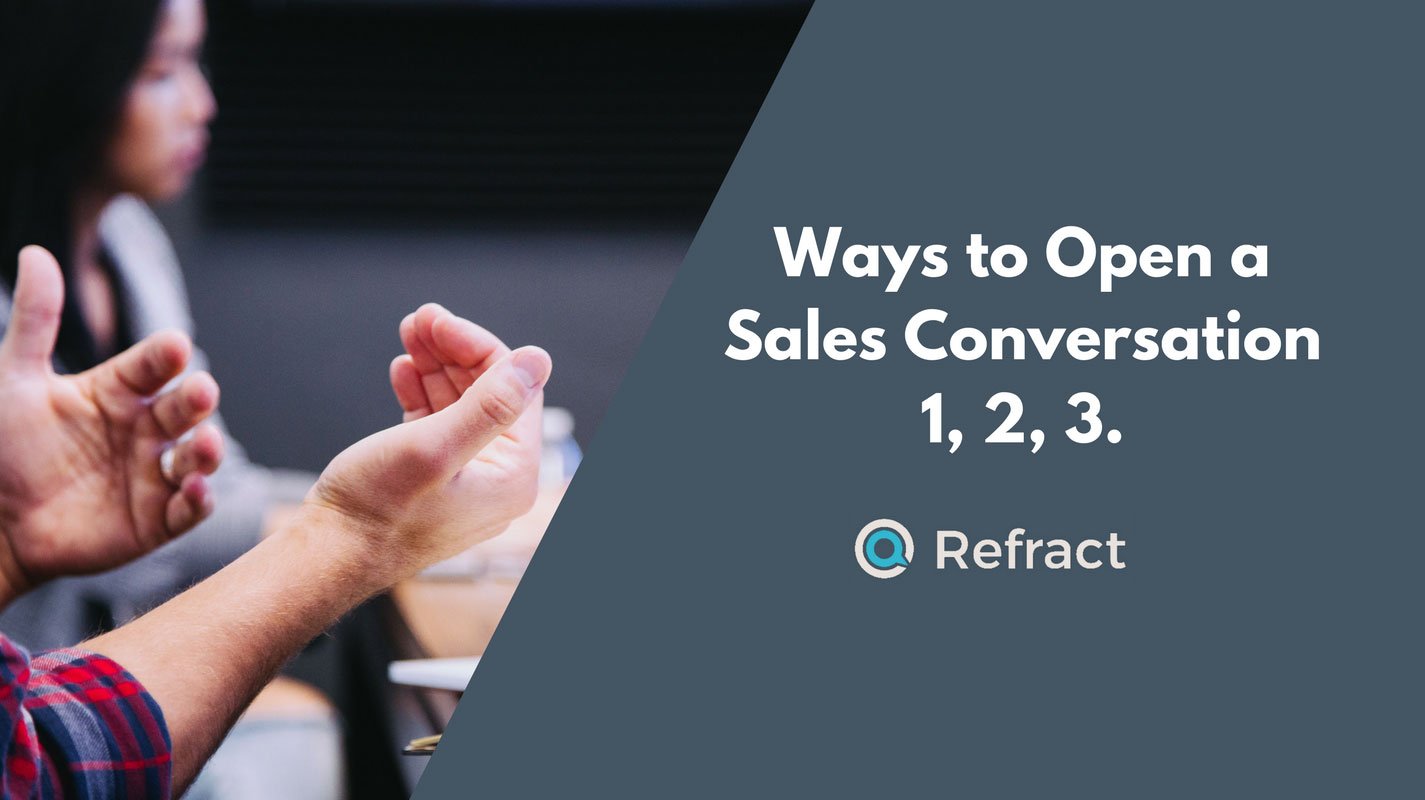 When it comes to starting a sales conversation these days there three main avenues to choose from. 1) send an email, 2) cold call and 3) use LinkedIn. Some might argue that an InMail is close enough to an email to be a subcategory under that banner, but I disagree and I’ll touch on that later.

Now, I’ve put email up there first though the phone is actually my weapon of choice. Email is still the most popular outreach method in sales for a number of really good reasons:

a) Your prospect can open it anywhere, any time. How often do you check your emails on your phone on a Sunday night so you know what’s awaiting you on Monday morning? I do it to see if anyone has replied over the weekend to book a demo! In fact, if you do catch someone’s attention at the weekend, when they’re more relaxed, not heading into a meeting or trying to hit a deadline, they’re far more likely to actually read your full email and to take the time to respond.

b) You can send it any time, any where. I’m based in Newcastle (up in the frozen wastelands above London) which means I’m on GMT. I also have a young family, the school run, various clubs, the grocery shopping and (on rare occasions) a social life. That means when the West coast of the US is arriving at work, I’m heading off to feed little my little monster tea. But with delayed send options, my emails can be landing in inboxes the world over at 8:47am local time...

c) Not everyone is a phone person. I had someone actually panic when he realised I wasn’t the call he was waiting for and he’d picked up the phone to a stranger. The conversation went something like this:

Me: Oops, no, it’s Jenni from Refract - sounds like this might not be a good time John?!

Not the best way to start a conversation, with an email to say ‘Hi, I’m the girl that totally freaked you out earlier, sorry about that, wanna buy Refract?’

d) You can do it en mass. Yep, you heard me - the mailmerge is still a thing. Use good tools and put thought into it. Add value and personalise. Keep it very short and to the point and you will get responses. It doesn’t work for every market (we get better results in the recruitment sector than in SaaS for example, where everyone is super tech savvy) but it does work if you do it right and it means you get your name in front of a lot of people with minimum effort.

e) It’s less disruptive. A prospect can see your email, scan it, think ‘hmm, interesting’ then come back to it later. They can share it with others too, passing it on to provide an instant referral. It’s convenient even if it’s unexpected.

f) It’s not ‘live’. You can rewrite an email as many times as you like before you send it. No-one can interrupt you halfway through! You can spend as long as you like writing the perfect pitch for that individual. And they don’t need to be at their desk when you send it.

There’s plenty more arguments for email but I think the above provide a compelling case for it. Still though, I’m a phone girl, and here’s why:

It’s more human. People buy from people. How old is that phrase in sales? I can’t convey laughter via email unless I use an emoji (and let’s not have that argument here!). I can react to a prospect too - understanding in a few seconds whether they’re a ‘short and sweet’, brusque or open and tailoring my approach accordingly.

It’s two-sided. When you call, you engage a prospect in a conversation. You can have a beautifully tailored script, the perfect elevator pitch, a really good reason for calling and it might be 20 seconds before you have to chuck that out of the window and go with the flow! This is a terrifying thing to a lot of sales people - but it’s actually a beautiful thing if you embrace it. Plan all you like but then sit back, drop your shoulders, and pick up the phone, and have a conversation.

It’s disruptive. When you actually speak to someone, if you’re passionate about what you do, and you can convey that to your prospect, you will leave an impression. Some would argue that this is the kind of disruption that leaves a prospect on the back foot, but if you have a great reason for the call and you nail the first 30 seconds, that should never be the case.

It’s live. It’s natural for a prospect to find reasons not to buy what you’re selling. ‘We already have systems in place’, ‘we’ve got no budget’, ‘the timing isn’t good’. Objections are a standard part of any sales conversation. With written communications it’s really easy for a prospect to make up their mind that your product/services aren’t for them and move on, and BAM, you’re done. On the phone, you can counter an objection immediately, change the direction of the conversation, correct misconceptions about what you’re offering, demonstrate value, tell a story. That’s powerful. Live is good.

You might get a voicemail. Yes, a voicemail. I love a voicemail message. “Hi, I’m the smiley ginger woman being nosey on your LinkedIn profile, here’s why I picked up the phone…. I’ll drop you an email now and call back on….” - go on, have a look at me on LinkedIn, now I’m a person and also, when you read my email, you read it in my voice, with a snippet of my personality. You’re also expecting my email and the next call - it’d be kind of rude to ignore me....

You might get a PA. I love a PA even more than a voicemail! She/he should be treated as if you have got through to the person themself - they know EVERYTHING about their company. They know if you’re barking up the wrong tree and will point you in the right direction. They will tell you far more than your prospect because you’re not trying to sell them something and because you acknowledged that they are the conduit to that person you want to sell to. Talk to them. They have your prospect’s ear - probably to the same level as their spouse - they are your friend.

You might get a ‘no’. How often do you ignore a sales email because you’re not interested? How often do you reply to one to say no? How much time would you save if people who weren’t interested replied to let you know? We can counter arguments via a long chain of emails over a number of days, or we can spend 5 minutes ruling someone out. That’s really valuable. Plus, if you bow out gracefully, having made a good impression, a prospect will be a little more likely to recall you should an opportunity subsequently arise….

And that brings me to InMail. Still the new kid on the block in comparison but the closest you can come to a combination of the first two because:

1) They can see your face. That’s the ‘human’ box part-way ticked straight away.

2) You can show your credentials. A prospect can see from how you portray yourself that you have expertise and knowledge which might be of value to them. Your recommendations give them insight into your character, and your work history will tell them that you know your stuff. It’s your pedigree and, done right, it’s a great introduction to the professional you.

3) The ‘teaser’ dot. The red dot on the LinkedIn tab that notifies you that your attention is required? It’s a powerful little dot. It’s like the flashing light on your phone. It’s compelling and we’re conditioned to find out what has caused it. It’s that little flicker of excitement and anticipation... That’s a good emotional position from which to start a conversation.

4) You chose them. This is personal. You, a human, have found them, an individual among thousands of others and, having read something they have written about themself, you chose to reach out. You have something that, based on this research into them, you think will add value to the job they dedicate a huge part of their life to. Personal is powerful.

Starting a conversation is as much of a sales skill as closing one. Everyone has their own methods, their tried and tested ways and, ultimately, a combination of all the above will open a door to a conversation. It depends as much on the prospect’s conversational preferences as your own and a good SDR will try every avenue - a number of times - to get in front of an ideal prospect.

There’s a fine line between tenacious and annoying, that’s a rule you have to respect, but remember that while your prospect may be top of your mind, you aren’t top of theirs and that’s why persistence pays off.

The key is being flexible and willing to try something different when all else fails. So try that letter, or a postcard, or a homing pigeon. Whatever it takes to start a conversation… 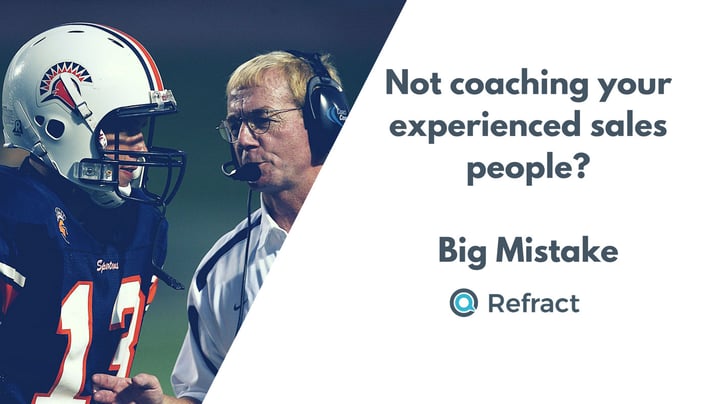 Not coaching your experienced sales people? You're making a huge mistake.

I was speaking with a prospect on a cold call last week about their aims to start getting better at improving their new hires. The topic of conversation switched to their experienced reps and the day ...
Read More 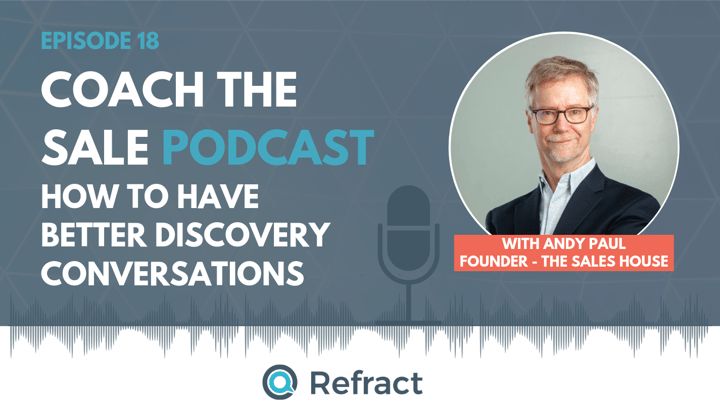 Coach The Sale EP18 - How To Have Better Discovery Conversations

Discovery is one of the most critical components in the sales process. But when it comes to engaging new prospects, so many sales professionals wade into uncharted waters without proper preparation, ...
Read More